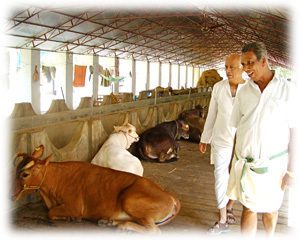 Panmana Asramam is an acknowledged centre of learning and service situated amidst lush coconut palms and paddy fields. Because of its simple and serene surroundings, the Asramam has been a pilgrim centre that for the past 75 years has been attracting thousands of people from all over the world. Mahatma Gandhi visited the Asramam and stayed there for two days spending the time in prayers and contemplation.

Jeevakarunyam (Kindness toward living beings) forms the pillars of foundation of the Panmana Asramam. Mr. Gopala B. Pillai and the Jeevakarunyam scheme have together created a rescue and rehabilitation center for animals that are abandoned or destined to slaughter-houses. These animals are taken in, nursed to good health, fed and kept in reasonable comfort until their natural death.

The shelter has its own water-supply pond and a warehouse to stock feeds and other material. Staff, including veterinarians, is housed on the campus. Animal manure is used to cultivate fodder for cattle and generate gas for energy needs. The farm uses only organic pesticides. Scouting for a second location for the expansion of this project is already on. The aim is that these projects will be adopted by local groups everywhere to become harbingers of social good and universal compassion.

This website uses cookies to improve your experience while you navigate through the website. Out of these, the cookies that are categorized as necessary are stored on your browser as they are essential for the working of basic functionalities of the website. We also use third-party cookies that help us analyze and understand how you use this website. These cookies will be stored in your browser only with your consent. You also have the option to opt-out of these cookies. But opting out of some of these cookies may affect your browsing experience.
Necessary Always Enabled

Any cookies that may not be particularly necessary for the website to function and is used specifically to collect user personal data via analytics, ads, other embedded contents are termed as non-necessary cookies. It is mandatory to procure user consent prior to running these cookies on your website.